We left Wellington much later than we’d planned after dropping Our Darling Girl off and drove through light traffic up through the Hutt Valley, with the Man of the House eying the ranges on his right with some trepidation. I don’t know what he was worried about, the vertiginous drops were on my side and you only really get an appreciation of the height of the Rimutaka Ranges from up on the road. It’s not easy to drag your eyes away from the bottom of those deep, deep ravines so I was mildly relieved when it got dark and I couldn’t see how far down it was on the other side of the totally inadequate railing.

Having made it safely across we discovered that Featherstone’s motel was full and after fuelling up, the cheery man at the gas station steered us on to Greytown. The Oak Estate Motor Lodge, set amongst amber coloured oak trees was clean, comfortable and warm. After breakfast we drove south to Lake Ferry, not actually a lake but an estuary separated from the southern ocean by a thin line of sand dunes. There is a small settlement and an old pub looking over the lake but we didn’t get out for a look around. Horizontal rain turned to hail just as we arrived and the only person we saw, a very wet and cold woman walking her dog was in a hurry to escape. Waves crashed over the sand dunes, the wind pelted the car and whipped up waves on the lake and we felt no desire to stay.

The best thing about such strong wind is that it blows the squalls away as fast as they arrive and on the drive down to Cape Palliser, Matakitakiakupe (the view that was Kupe’s), the sun occasionally broke through. On one side of the road, the wild southern ocean, hurled itself at us straight from the south pole, covering the car with spray and the road with foam and on the other, weather hardened sheep and cattle grazed with their backs to the wind on sparse hillsides who’s tops disappeared into the clouds. Small settlements of seemingly abandoned holiday homes dotted the coastline, the largest of them being Ngawi, the fishing village where locals launch boats with bulldozers from the stony beach into the surf. On this stormy day, though the boats were all safely on shore. Seals sheltered on the roadside and in the rocks that prevented the road from being washed into the sea. Waves broke across the road and the Man of the House fretted about the salt on his car until he drove with relief through a fresh water ford. 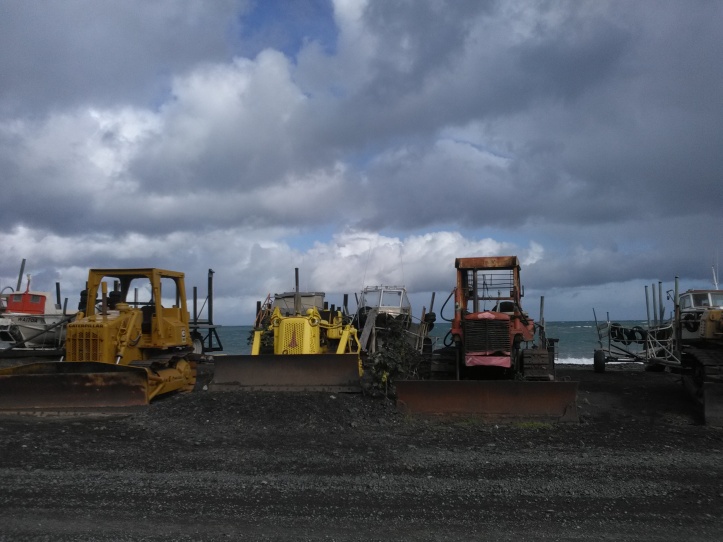 At the end of the road, the Cape Palliser lighthouse perches on a rocky outcrop, 253 steps above the carpark. If you want to see more seals you can walk through the farm around the corner and up the west coast to a seal colony but we were content to photograph the sunbathers on the roadside, especially with the looming sky threatening more rain. 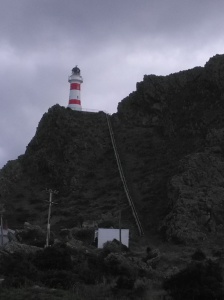 Feeling a little windswept and chilled to the bone we retraced our way back north and left the coast behind. At Martinborough we stopped for lunch and some friendly banter with the locals before winding our way up along secondary roads to Castlepoint, but that’s another story about another wind swept beach and another lonely lighthouse.