Last summer we were treated to a visit by this juvenile karearea, NZ Falcon. It wandered across our lawn on a searingly hot day and perched in the shade of a kowhai tree until the worst of the heat had passed. 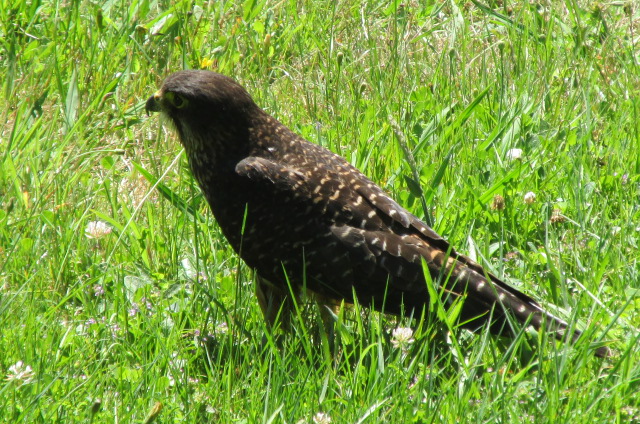 Karearea are rarer than kiwi, they number less than one tenth of the kiwi population and are declining. They enjoy the same legal protection but shamefully, deliberate shooting is still their leading cause of death.

Unfortunately, the very attributes that excite karearea lovers also alienate others. They are predators. They confront people with violent and unpleasant images. Yet the lion, the ultimate predator has been celebrated throughout history for its courage and strength. Karearea is our lion, king of our forest.

Karearea is not the only native bird of prey to suffer from human persecution. Kahu the Australasian swamp harrier was systematically culled for almost a hundred years, not only by farmers who saw it as a threat to their stock but also to protect introduced game birds. A bounty paid for a pair of harrier feet resulted in hundreds of thousands of the birds being shot, trapped or poisoned. In fact, kahu is not a threat to stock. The bird is unlikely to attack something as large as a sheep. It eats mainly small birds and rodents but its habit of feeding on carrion such as dead lambs and road kill could have fuelled that belief.

New Zealand was once home to the world’s largest eagle, the moa-hunting Haast’s eagle with claws like a tiger’s. It became extinct after humans arrived, as did the laughing owl, Eyles’s harrier and owlet nightjar, all birds of prey. Karearea will slip away too if its value as part of our unique biological diversity is not recognised.

The intrinsic value of each of New Zealand’s native species is equal. No matter how endearing or challenging they are, there isn’t one more precious than another. And, if they are to share their place with introduced species, then it’s worth a little inconvenience and extra effort to preserve what we still have.

To find out more about our birds of prey, visit www.wingspan.co.nz.