You’ll never guess who came to visit the other night. That possum. Yes, I’m sure it’s the same one. It was making a beeline for the laundry.

It was the night of Cyclone Cook. The wind got up around dark, it was filthy out and the Man of the House took pity on The Dog and let her sleep in the carport. Quite frankly, I don’t think he wanted to go out to the kennel in that weather either. The Dog has the nicest nature but she’s a bit of a wimp. She will bark at visitors but will only approach the one’s she knows and if The Man picks up his gun or it thunders, she squeezes herself under the laundry until it’s all clear. An SPCA rescue of indeterminate parentage, she has a whippet back end, a staffy face and anything you like in between. She’s golden yellow and I think that’s where the SPCA got the ‘lab cross’ label from that we fell for. We’ve had her for about eight years and she has firmly established her place in our family. One of her more useful and surprising characteristics is a huntaway heart. She likes nothing better than to move cattle.

During the day, The Dog sleeps on an old mattress in the carport. It’s funny, she can’t wait to be let off in the morning, where she slept all night on an old blanket in her kennel, to run to her day bed and sleep all day there. She may as well spend the day at the kennel but that’s obviously not how it goes.

Our laundry is a small room at the end of the carport, that can only be accessed from outside. It’s where we had our original bathroom when we hadn’t built upstairs yet and still has a toilet, hand basin and bath. Very handy when we have visitors or are caught short out in the garden.

The possum had obviously sufficiently recovered from the trauma I inflicted at it’s last visit and decided the weather was too rough to spend the night outside. It must have got an awful shock when it walked into the dog.

It was about 10.30 and we had no power because the waterwheel decided we didn’t have enough to contend with, with a flood and a cyclone and took this opportunity to crap out. Very inconveniently some vital part of the running gear failed. Not a quick fix so we were running the generator and having early nights. The Man of the House was snoring away and I was trying to get to sleep when an awful ruckus erupted downstairs. I nudged The Man awake and said “What the heck was that?’ The Dog barked and some other wild creature growled and squealed and they were both thrashing about. We ran down stairs, threw open the back door and The Man of the House shone his torch on an empty carport, sprinkled with tufts of gingery brown fur. We could hear The Dog barking out the back followed by the bitter complaints of an indignant possum. The laundry floor was also covered in fur so I shut the door and called The Dog. She came running, looking somewhat bemused but very pleased with herself. We have been so successful at killing the pests that she has no previous possum experience. She only gets to chase rabbits and they are much harder to catch and don’t usually fight back. She wasn’t entirely sure what she was dealing with and decided the excitement was all over.

We told her what a clever girl she was to stop the intruder making a mess in the laundry and went back to bed. In the morning we discovered more fur in the yard but no dead possum. We haven’t heard from it since and can only assume that because it has lost a significant amount of it’s fur coat, it has left for a warmer climate. 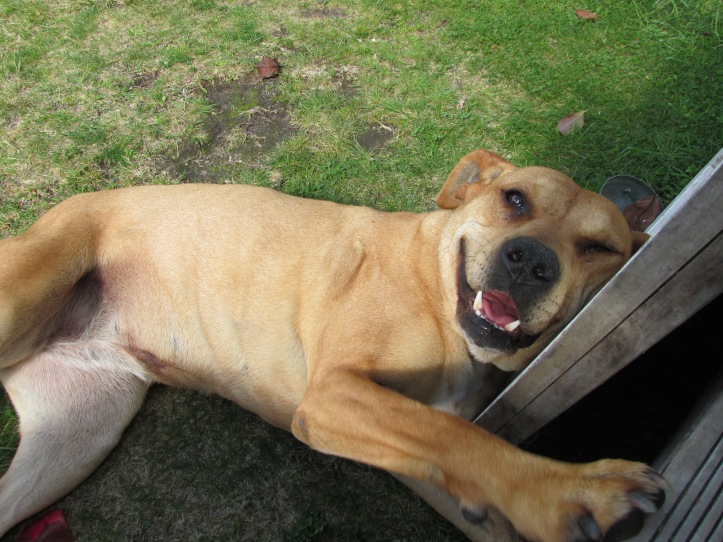